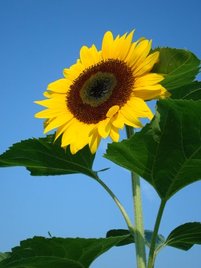 ~ Spiritualism's symbol is the Sunflower ~

The Following article was written by Rev. Janet Tisdale, August 2008 and is reprinted here with kind permission from Rev. Janet Tisdale, NST from the Church of the Living Spirit, NSAC , Glendale, AZ.  Please visit their web site for further information.  http://www.churchofthelivingspirit.com/

~~~~
Spiritualism is a common sense religion, one of knowing and living.  We accept all truths and endeavor to prove their validity.  Truths are found in nature, in other religions, in writings, in science, in philosophy, in Divine Law and are received through spirit communication.

Spiritualists believe that God or Infinite Intelligence is ALL That Is, expressing through all creation by love, light and law. Humanity, the most complex of life on earth, reaches this Divine Source through prayer, meditation, listening to the inner awareness, and service. Why service? Because every living thing is a part of God, so as we serve life we also serve the Higher Energies.

Life is consciousness - without consciousness there is no existence. Consciousness is the totality of one's thoughts, feelings, emotions and impressions on the mind. The state of thinking is how we create our consciousness. Spiritualism teaches that through the Law of Action/Reaction or Cause/Effect we take control of our lives as we control our thoughts. Positive thinking leads to happiness and assists the individual to grow.

Spiritualism encourages growth of loving consciousness in the physical world not only for the immediate benefits, but also the future rewards in the Spiritual Dimension. The Law of Continuity and the Law of Attraction teach us that "As within, so without. As above, so below." A soul arriving in the next plane of existence will find they take their consciousness with them and will be in the company of like-minded entities. The more loving and spiritual the soul has become, the more beautiful and rewarding will be the new home and associates in the spirit land.

Life is continuous, the consciousness never dies for it is part of God and the Infinite is forever. Upon the cessation of the physical housing the spirit graduates to the next plane of existence. This plane is similar to our earthly plane but at a higher rate of vibration and luminosity. One method of service in spirit is to communicate, assist and help illuminate those that are living on the earth plane. Mediums in the Spirit World and mediums in the physical world adjust their vibrations to enable communications between the two planes of existence. It has been demonstrated in our Churches, home circles and in scientific investigations that "there is no death, there are no dead."


All life moves in a gradual state of evolution or change. Arrival in the Spiritual realm does not mean instant knowing. Rather the personality of the individual and the understanding gleaned on the earth plane continue at the same level, ready to begin the next phase of unfoldment. The physical world has aches, pains and struggles. These are not taken to the spiritual realm which is love, light, law, peace, cooperation, sharing, and growth. The soul body is whole and shining forth that which is within its essence. Falsehoods, separateness, and illusions are left behind as the desire to progress awakens. The rewards follow according to the goodness of the entity.


Life concerns growth. We, Spiritualists, try to keep an open, even mind so new truths may be incorporated into our principles. In keeping with this, we have no bound creed or set of dogmas. Our Declaration of Principles, which form the basis of our beliefs, has changed over the years as new clarification has been gleaned. We know that truth is the highest religion and endeavor to test our beliefs, altering them as new truths are proven.

Humans are spiritual beings, an indivisible part of the Divine. God is The Spirit within each individual waiting to be consciously accepted and activated. One of the desires of Spiritualism is to awaken this spirit within, to move beyond the five senses to higher awareness. Each person has free choice and is personally responsible, yet Spiritualism, through communication with the higher teachings derived from the Spirit World, tries to provide a way, a guideline, a set of principles, to help the world travelers to proceed upward, toward the light. The following pages briefly present the message of Spiritualism.


Spiritualism is the Science, Philosophy and Religion of continuous life, based upon the demonstrated fact of communication, by means of mediumship, with those who live in the Spirit World. (1919)

"Spiritualism Is a Science" Because it investigates, analyzes and classifies facts and manifestations demonstrated from the spirit side of life.

"Spiritualism Is a Religion" because it strives to understand and to comply with the Physical, Mental and Spiritual Laws of Nature, which are the laws of God.

A Spiritualist is one who believes, as the basis of his or her religion, in the communication between this and the Spirit World by means of mediumship and who endeavors to mould his or her character and conduct in accordance with the highest teachings derived from such communication. (1914, Rev. 1938)

A Medium is one whose organism is sensitive to vibrations from the spirit world and through whose instrumentality, intelligences in that world are able to convey messages and produce the phenomena of Spiritualism. (1914)

A Spiritualist Healer is one who, either through one's own inherent powers or through mediumship, is able to impart vital, curative force to pathologic conditions. (1930, 1993)

The Phenomena of Spiritualism consists of Prophecy, Clairvoyance, Clairaudience, Gift of Tongues, Laying on of Hands, Healing, Visions, Trance, Apports, Levitation, Raps, Automatic and Independent Writings and Paintings, Voice, Materialization, Photography, Psychometry and any other manifestation proving the continuity of life as demonstrated through the Physical and Spiritual senses and faculties of man. (1950)